DNS is a naming system which coverts human readable domain names into computer readable IP addresses. Whenever there is a query for a domain which is not in the resolver’s cache, the process happens by traversing through the entire DNS hierarchy from the root servers to the top level domain (for e.g .com). The top level domain then gives us the information about the nameserver that has been delegated the responsibility of the domain whose IP address we are looking for. We then get the information about that domain from it’s nameserver. The results are then cached by the DNS resolver with a particular value of TTL(time to live) after which the entry in the cache expires. In some cases a domain may be identified as malicious and needs to be removed. This could be because of various reasons like malware propogation, phishing etc. One of the steps to prevent users from accessing this domain is by deleting the domain from its TLD (top level domain) servers. However this does not completely remove the threat because the domain will still be resolved by the resolver until the TTL expires. In this article we will discuss about a recent DNS exploit discovered by researchers which is present in most of the DNS servers which exploits a weakness in the cache update logic of some of the DNS servers. This allows their cache to be overwritten in such a way that it is possible to continuously extend the TTL for the delegation data of a particular domain and prevent it from expiring. Hence the domain will be completely resolvable even though it has been deleted from the TLD servers. These types of domains have been named as Ghost Domain Names.

This article is based on the recent work by Jian Jiang, Jinjin Liang, Kang Li, Jun Li, Haixin Duan and Jianping Wu. The research paper by them can be found here.

So Lets understand how DNS resolution works. Lets say the user opens up the browser and types in infosecinstitute.com. It is now the responsibility of the DNS resolver in the user operating system to fetch the IP address. It first checks its local cache to see if it can find a record for the queried domain name. A cache usually contains a mapping of IP-addresses to hostnames which are saved during recent lookups so that the resolver does not have to fetch the IP address again and again. If it cannot find the IP address in its cache it queries the DNS server to see if it has a record for it. A DNS server is usually given to you by the ISP or you can manually set up a DNS server for yourself. If it still cannot find the IP Address then it goes through a recursive DNS query in which it queries different nameservers to get the IP-address of the domain. As soon as it finds the IP-address it returns the IP-address back to the user and also caches it for its future use.

It is important to understand how a DNS lookup works. We will do this by traversing the entire DNS hierarchy from the root servers to the top level domain. Open up the terminal in Backtrack (you can use your own favourite distro) and type in “dig”. You will get something as shown in the figure below. 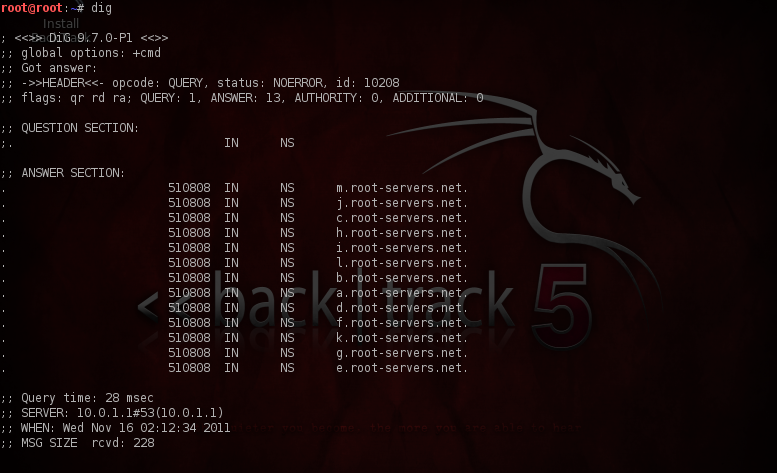 What we get is a list of the Root DNS Servers. Let’s use this root DNS server to query infosecinstitute.com. We do this as shown in the figure below

What we get is a list of authoritative name servers for the com domain. Notice the dot (.) at the end, this is what makes this a fully qualified domain name (FQDN). Let’s use these Name servers to query again.

And now in the Answer Section we can see that the Ip-address for infosecinstitute.com is 216.92.251.5. SUCCESS !

It is also possible for us to set custom DNS servers to query for different records. In the figure below, we will be using DIG to perform a DNS query for the A record of infosecinstitute.com using Google’s DNS server (8.8.8.8).

The thing 3599 basically indicates the time to live for that particular record provided by the DNS query. If we do the same process again we can see that the TTL has now reduced to 3503.

In case a domain is identified as malicious, then its removal from the global domain name space is basically a 2 step process. The first is to remove its records from the TLD servers and the second is to wait for the TTL to expire across all DNS servers. 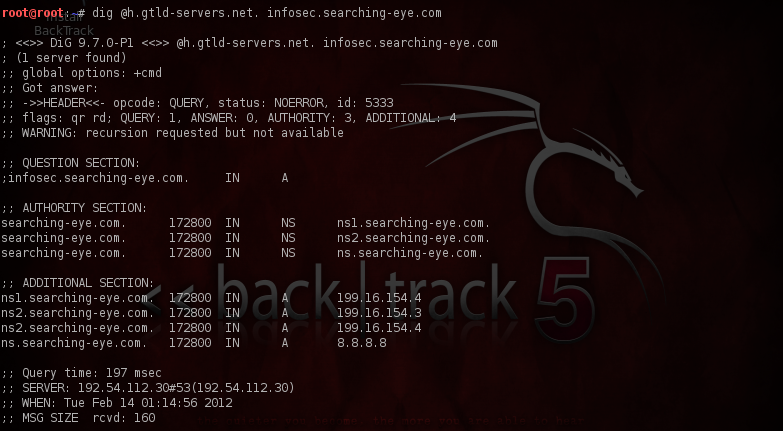 Let’s see this through an example. Let me create a subdomain named infosec.searching-eye.com on my website.

Once it is done, let’s use a particular open DNS server say 8.8.8.8 (OpenDNS) to query the domain.

We can see the response in the answer section. Also we can see that it has a particular TTL value of 14399. The delegation data is now cached by this server. So let’s go ahead and remove the subdomain now.

As we can see from the image above, we get no response. This is because there were no cached records present in our default DNS server due to which it had to traverse the entire DNS hierarchy in order to find the IP address of the subdomain we were looking for. Once it reached the TLD (i.e .com), it found out that there were no records there. Hence it returned no results.

The vulnerability exists in the DNS cache update policy of a particular DNS server. As discussed earlier in the article, a domain can be completely removed from the global domain name space by removing it from the TLD and allowing enough time for the delegation data to expire across all DNS servers. If somehow it is possible to extend the TTL of delegation data such that it doesn’t touch 0, then the domain will still be resolvable.

The first step is to register a nameserver. This service is generally provided by your domain service provider. This is because i want my nameserver to be of the type xyz.mydomain.com rather than xyz.hostingcompany.com. Note that the IP address you provide must be a valid IP address of a nameserver.

Once we have registered a nameserver, we have to set it as our nameserver as shown in the figure below. 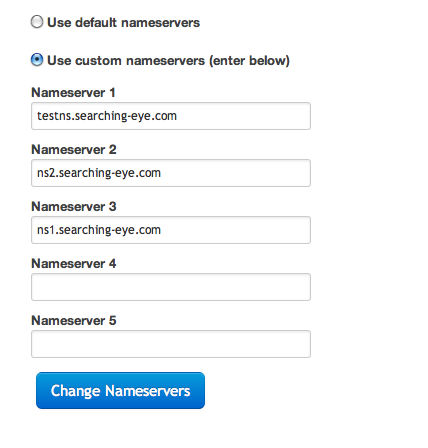 We can confirm that testns.searching-eye.com has been successfully set as a nameserver by querying for an non-existent subdomain as shown in the figure below. 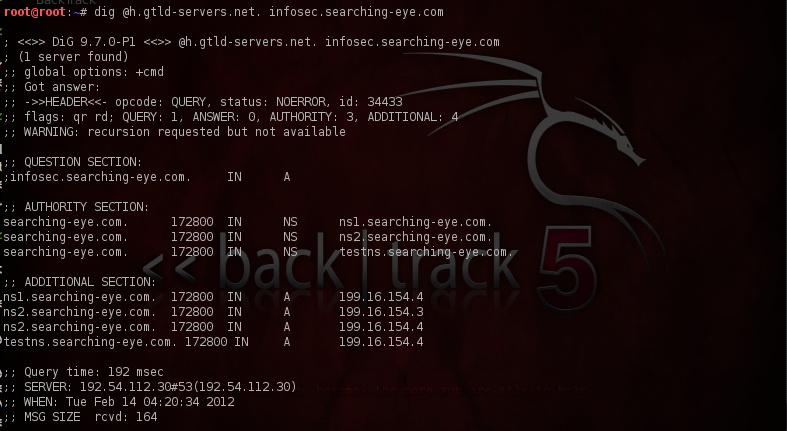 We then create another subdomain named ghost.searching-eye.com.

Once this is done, we take a particular DNS server(which we think is vulnerable) and use it to query the subdomain.

After the subdomain has been deleted and some time has passed by, the delegation data could look something like this.

We can notice that the new delegation data has a new TTL value. If this process is repeated over and over again, it is possible to continuously keep the TTL value from reaching zero. (Though in some cases it will touch 0 after a long period of time, read the paper for more details).

Ghost domain names are those domains that have been removed from the TLD but are still resolvable by the DNS server. There could basically be two reasons for it.

These are the steps that could be followed to identify the Ghost domain names.

If the DNS lookup step doesn’t give us an IP-address but we get a result from the DNS query step using a particular DNS server, then there is a possibility that the domain is a Ghost domain. We cannot be sure because the results might be coming because the TTL for the delegation data on the DNS server may not have expired (excluding the possibility of resetting the TTL). Hence the challenge is now to identify which are the ghost domains and which are not. The following steps could be followed for that.

In this article we discussed a vulnerability recently discussed in a paper which signifies how it is possible to illegally update the cache of a DNS server and renew its TTL value for the delegation data of a particular domain. This would mean that the domain will still be resolvable even though it has been removed from the TLD. We then discussed some of the possible methods through which it is possible to determine if a particular domain is a Ghost domain or not.