I am glad to release a completely new version of Damn Vulnerable iOS App written in Swift 4. With developers now migrating to Swift for developing apps, it is important to have a testbed app for iOS in Swift. Though I have added some sections in Objective-C too which the users can test to learn Objective-C related vulns. 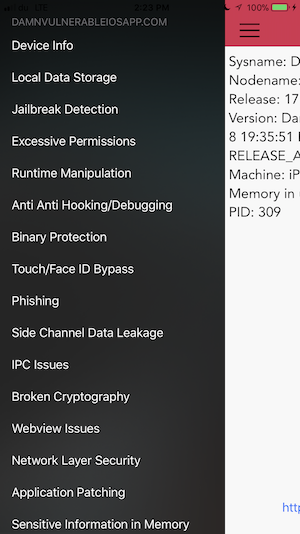 The following vulnerabilities are covered in this version.

One of the most common misconfiguration issues that i find during testing iOS apps is the bypass of the App Transport Security feature introduced by Apple in iOS 9. Here’s an excerpt from Apple’s documentation about ATS.

“Starting in iOS 9.0 and OS X v10.11, a new security feature called App Transport Security (ATS) is available to apps and is enabled by default. It improves the privacy and data integrity of connections between an app and web services by enforcing additional security requirements for HTTP-based networking requests. Specifically, with ATS enabled, HTTP connections must use HTTPS (RFC 2818). Attempts to connect using insecure HTTP fail. Furthermore, HTTPS requests must use best practices for secure communications.”

In this article, i would like to give a quick walkthrough of the new vulnerabilities and challenges that we have added in version 1.5 of Damn Vulnerable iOS app.

In the Insecure Data storage section, we have added challenges for the following databases.

In this small article, we will look at a very handful utility named Xconfor bypassing Jailbreak detection. As per the wiki page …

xCon is a collaborative project by n00neimp0rtant and Lunatik that aims to be an all-in-one solution for hooking every known method and function responsible for informing an application of a jailbroken device. At first, the project aimed to patch applications on a per-app basis, but now it uses lower-level hooks to cover any apps that attempt to use the same procedure, even patching apps not explicitly reversed by the developers. Originally an open-source project, it remains closed-source now to discourage App Store developers from working around xCon’s hooks.

A very handful resource for detecting jailbroken devices can be found here. Here is a screenshot from the page. The purpose of Xcon is to make sure all these checks fail.

In this article, we will talk about FAT binaries and see more usage of LLDB.

You can see the architecture for your project by going to the Project in Xcode and looking under Build Settings.

In this article, we will look at some of the most important commands in LLDB to debug applications.

If you have been following this blog series, you would have noticed that we have been using GDB until now for debugging applications, but the support for GDB has been disabled by Apple. Apple has compiled a very useful list of GDB to LLDB commands to get you up to date with debugging via LLDB that can be found here.

We will look at some of the most important commands after hooking into an application. In this case, lets start debugging the Twitter app. So make sure that the Twitter app is running in the foreground on the device and start a listener for the Twitter app.

In this article we will learn about the LLDB debugger used by Apple’s Xcode for debugging applications, understand why it is better for security testing, and then learn how to use it to debug iOS applications.

The following excerpt is from Apple’s documentation.

LLDB is Apple’s from the ground up replacement for GDB, developed in close coordination with the LLVM compilers to bring you state-of-the-art debugging with extensive capabilities in flow control and data inspection. Starting with Xcode 5, all new and preexisting development projects are automatically reconfigured to use LLDB. The standard LLDB installation provides you with an extensive set of commands designed to be compatible with familiar GDB commands. In addition to using the standard configuration, you can easily customize LLDB to suit your needs

A good way to start leaning about the LLDB debugger is to watch this video from WWDC 2014.

p>In this article, we will discuss the extent to which you can test applications on your Mac rather than the device. This could be useful for many reasons, sometimes you may not have a jailbroken device but want to get a POC for a vulnerability. We will discuss what are the things you can and cannot do. To test the application on your system, you will need to have Xcode installed on your system and you will run the applications on the iOS simulator.

Installing ipa files from iTunes on your simulator

In this case, we are going to perform our testing on Damn Vulnerable iOS app

In this article, we will look at a very handy framework for analysis of android applications named Drozer. Drozer is a very useful tool as it eliminates the need for having seperate tools for performing different security checks in an android application. It has a list of modules that you can use to interact with the application using Android’s Inter-Process communication. Additionally, you can also install exploits and use it to exploit an android device.

The main purpose of this article is to make sure you are familiar with drozer so we can use it in the future articles.

In the previous article, we looked at setting up a mobile pentesting platform for Android applications. By now, you must have set up an emulator using genymotion and installed all the android command line tools along with some other additonal tools (drozer, dex2jar, apktool). In this article, we will look at some information gathering techniques. We will see how we can decompile an application to its java source, analyze the signature of the application and many more things.

At this point, i would also like to mention that if you are looking for a VM that contains all the tools to cater to your android application pentesting needs, have a look at Android Tamer.

This is a guest lecture by Egor Tolstoy. Egor is a full-time iOS developer working at Rambler&Co and living with his lovely wife in Moscow, Russia. In his spare time he investigate iOS applications for different vulnerabilities and blogs about my research.

Parse is a wonderful BaaS which helps with setting up backend infrastructure for your mobile application as fast as possible. Maybe just because of this simplicity many developers forget about a number of new security issues and vulnerabilities.
Read on →

I am so excited to release the latest version of Damn Vulnerable iOS app for iOS 8. Up till now, DVIA has been downloaded more than 75000 times and i can’t wait for the count to reach 6 digits :–)

Following vulnerabilities and challenges have been added in the latest version.

You can download the latest version from here. The source code is available on the project’s github page here.

The easiest way is to install the application from Cydia. Add the source repo.kylelevin.com and search for DamnVulnerableiOSApp.

In this article series, we will learn at various concepts of Android application security while exploiting a vulnerable app InsecureBankv2. We will be looking at all the concepts from a noob’s perspective and hence i would recommend this blog series to beginners as well.

However, the first thing to do is set up a proper mobile pentesting platform for android application testing.

In this article, we will look at how we can analyze network traffic for applications that use certificate pinning. One of the best definitions i found of certificate pinning is mentioned below. It is taken directly from this url.

By default, when making an SSL connection, the client checks that the server’s certificate: